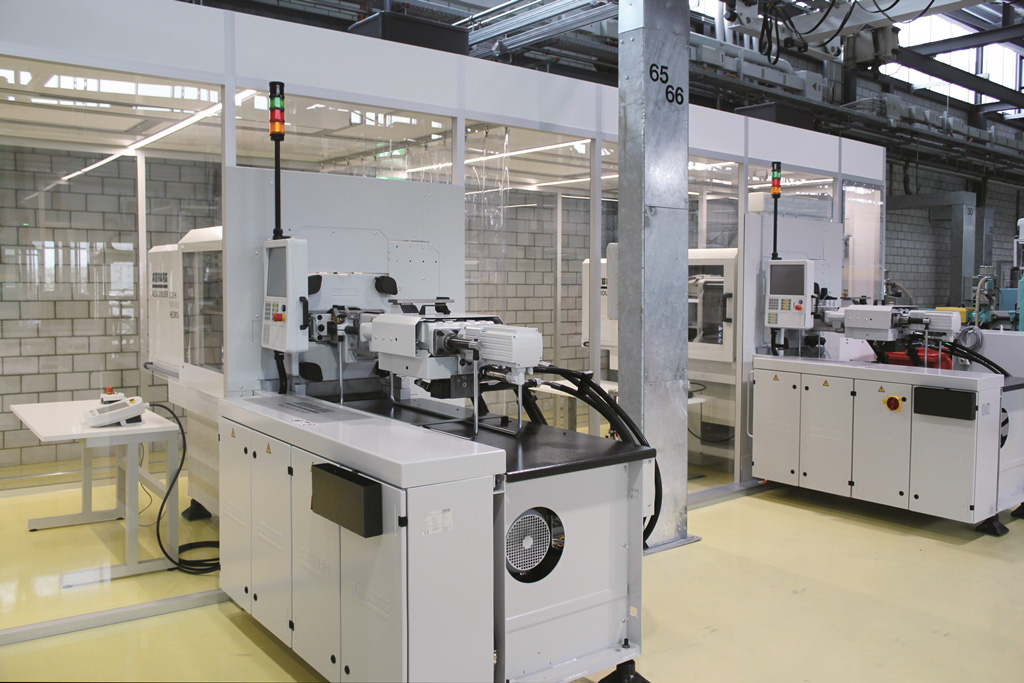 Micro injection moulding processes enable precise and cost-effective production of the smallest components made of plastic. In order to meet the highest requirements for product safety and quality, the production of medical technology products in particular usually takes place in clean rooms. Stamm AG has invested in a clean room with a new approach to machine connection. The micro injection moulding machines are located partly inside and partly outside the clean room.

At first glance, Hallau in the canton of Schaffhausen is a cosy wine village where the clocks seem to move a little slower. But as is so often the case, these small towns hide medium-sized companies that produce innovations at the highest level worldwide. Hallauer Stamm AG is without a doubt one of these creative, forward-looking companies. The plastics processors have dedicated themselves to the world of micro and small parts. And with great success. With the production of tiny components, such as gear wheels, plugs or syringes, the Hallauer go to the limits of what is possible. In the particularly sensitive area of medical technology, production takes place under controlled cleanroom conditions.

Working with micrometre precision
The smaller the products, the more complex and careful the manufacturing process must be. Every speck of dust can lead to functional impairment or even failure. If the products are also used in the medical technology sector, such as in minimally invasive surgery, absolute hygiene and contamination-free delivery must be guaranteed. Maintaining constant ambient conditions during production and packaging plays a major role here. Stamm AG has been micro-injection moulding medical technology components under controlled cleanroom conditions for many years. The Swiss company has invested in new micro injection moulding machines and has now expanded its cleanroom capacity with another ISO 7 cleanroom class. Detlef Moll, Stamm's managing director, explains the necessity of the investment: "We produce miniature plastic components. This requires the highest precision. Our technicians develop injection moulds that are in the μ-range for micro injection moulding. The details of the end products are often no longer visible to the naked eye and yet they are important components in the overall concept of our customers. Any particle that contaminates the production can lead to a failure of the sensitive components. Therefore, in addition to the precision of the process, we also ensure a controlled production environment." Stamm AG had gained initial experience in cleanroom technology with a cleanroom tent measuring a few square metres, which was used to inspect the parts produced. Convinced by the increase in quality, the Hallau-based company soon invested in a complete cleanroom system to which the injection moulding machines were docked. With this solution, the machines were still set up outside the clean room as usual and provided with a laminar flow enclosure that enables controlled air purity inside the clamping unit. The injection-moulded microparts are then removed by robots and fed fully automatically via encapsulated cleanroom conveyor belts into the cleanroom, where final inspection and packaging take place.

Innovative concept for injection moulding
With their expertise in highly sensitive production, the order volume of the Swiss plastics experts grew again, and a further investment in two new micro injection moulding machines with cleanroom production became necessary. In collaboration with their long-standing cleanroom supplier Schilling Engineering, the Swiss company opted for a new concept. In the newly commissioned 60 m2 cleanroom facility, which achieves ISO Class 7 air purity, the machines are set up half inside and half outside the cleanroom. For this purpose, a special outlet was constructed in the cleanroom wall. This variant has several advantages, as Moll explains: "The new compact solution saves us space and transport distances. The injected products can be removed from the machine directly in the clean room. However, the injection unit itself is still outside the clean room, so that the heat loads do not occur in the controlled area. This has a positive effect on temperature control and air conditioning. This concept is completely new and was developed with us by our long-standing partner Schilling Engineering."

State-of-the-art, energy-efficient cleanroom system
The newly installed CleanCell4.0 cleanroom system ensures ISO 7 cleanroom air quality. Separate personnel and material airlocks with mutual door interlocks ensure safe entry and exit of personnel and the packaged end product. The cleanroom system is equipped with ULPA class U15 high-performance filters. An innovative recirculation and return air system within the fully glazed cleanroom walls ensures precise cleanroom purging and has high energy efficiency, as the already filtered and cooled air is recycled back into the air exchange circuit. Wall and ceiling modules of the modular cleanroom are connected with a silicone-free GMP DichtClip system. The integrated CR-Control® control system provides further safety. Via the interactive monitor of the control system, connections are made to the connected sensors that measure pressure, humidity and temperature, to filter modules, climate cabinets, door and light functions and other components. All important functions are monitored and can be individually controlled and regulated. This also enables simple remote maintenance.

This article was published: KunststoffXtra 8/2018

No related articles yet