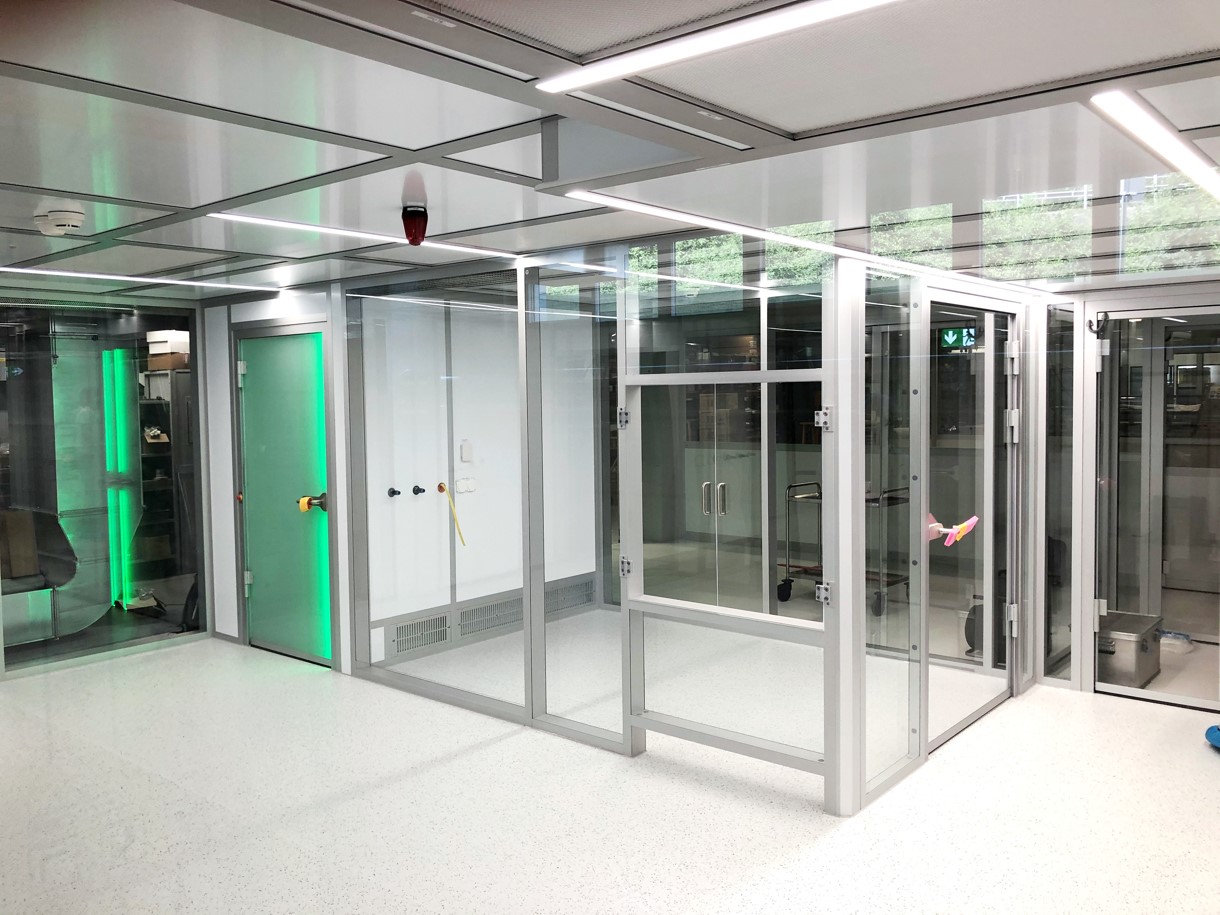 PCB production. The Swiss company GS Swiss PCB produces printed circuit boards for medical technology and electronics, which are made from wafer-thin base materials of only 12 μm. In order to produce the ultra-fine structures even smaller and more precisely in the future, the high-tech company has invested in three CleanCell 4.0 cleanrooms, which were set up during the ongoing production process.

The smallest components, which can hardly be seen with the naked eye, have led to rapid progress in electronics in recent years and have made ever more powerful devices possible. Printed circuit boards make mobile phones, computers, cars and aeroplanes work. In medical technology, too, such as hearing aids, the tiny components enable the high functionality of technology in the smallest of spaces. GS Swiss PCB AG, Küssnacht, has specialised in the production of miniaturised PCBs and is holding its own in this market with 170 employees against strong Asian competition. The Swiss high-tech company succeeds in this by guaranteeing high reliability of the sensitive products and by customised production with short delivery times. To enable the development of the sensitive components into even smaller structures, GS Swiss PCB has invested in three new clean rooms for various process steps.

Edgar Camenzind is the deputy production manager at GS Swiss PCB and explains the importance of cleanroom technology for the quality of production: "The critical processes in the production of our highly integrated PCBs take place in cleanrooms. Every speck of dust is our enemy and leads to rejects in production." Production must be completely controlled and without any contamination, he says. This, he says, can only be achieved with cleanroom technology. "In the future, we want to improve our ultra-fine structures even further and have therefore built three new clean rooms for different process steps."

Three new cleanrooms for controlled processes
The three new systems at GS Swiss PCB were planned, manufactured and installed by long-time cleanroom partner Schilling Engineering GmbH, based in Wutöschingen and Trasadingen in Switzerland. A major challenge was the tight space conditions, which required precisely adapted solutions. In addition, to keep production downtime to a minimum, part of the installation of the cleanroom facilities was carried out without dismantling the existing production lines. The development steps in PCB production are very specialised and divided into different areas.

A brand new feature at GS Swiss is the company's own sputtering plant, in which the carrier foil is copied. The foil serves as the basic material for all further processing steps. A 40 m2 cleanroom system of ISO cleanroom classes 5 and 6 was installed for the sputtering process. The materials are brought into the cleanroom via a 1.50 m wide material lock with a double swing door for lift trucks. At the request of the PCB manufacturer, cleanroom walls, doors and pass-throughs were fully glazed to allow an unrestricted view into the workspace from the outside. The extremely tight space conditions for the ceiling plenum of the cleanroom required special planning. The filter units and ventilation ducting were precisely arranged by the engineers from Schilling Engineering between the on-site pipework so that the narrow space could be used in the best possible way. In a further process step, multilayer rigid, rigid-flexible and flexible PCBs are produced. The wafer-thin carrier foils are joined and pressed in several layers. The 130 m2 cleanroom newly installed for this purpose meets the requirements of ISO cleanroom classes 7 and 8. Production of the multilayers was not suspended during the cleanroom installation, but postponed to the night so as not to have to bear excessive production losses here. The cleanroom system was installed without removing the existing machines, conveyors and production line connections from the room. The cleanroom walls were placed in front of the walls and windows of the existing building.

Clean room facilities built around the production lines Multilayer production is Edgar Camenzind's area of responsibility. The deputy production manager remembers the challenging time of the construction work: "Setting up the cleanrooms was a challenge in itself. For us and also for the Schilling Engineering team. We were in full production during the conversion." During the production of the multilayers and in the final photosensitive process, the cleanroom facilities were built around the production line, so to speak. "That already demanded a lot of flexibility and organisation from all of us." In a final process step, lacquer is applied to the PCBs and multilayers. Here, too, the production must not be contaminated by particles due to the low tolerances in micrometre-precise processing. Another 95 m2 of clean room ensure safety in the final processing.

The materials are printed, exposed, developed and packaged under ISO class 5 conditions. Individual areas are separated from each other with cleanroom curtains. 25 high-performance filters, installed directly above the processes and offering a high air exchange rate of more than 95 times per hour, ensure contamination-free production of the ultra-fine structures. Since no UV light is allowed to reach the sensitive materials during painting, special yellow light illumination was installed and the windows and glass doors of the clean room were coated with yellow film. Another special feature are wall modules made of stainless steel, which make it easier to meet the increased cleaning requirements of photosensitive production. After several months of planning and construction in various stages, all three cleanrooms have been commissioned by GS Swiss PCB.

277 m2 of ceiling modules with LED light strips and 58 filter fan units were installed. The modular design of the CleanCell 4.0 cleanroom system provides for an expansion of the cleanroom facilities. The cleanrooms were equipped with the intelligent CR Control system, including monitoring. Schilling Engineering was also responsible for the cleanroom-compatible installation of the personnel airlocks and the final qualification. Edgar Camenzind is glad that he can now concentrate fully on the demanding production of multilayers again: "The cleanroom project really went very well. Actually, there were several projects with different requirements. Good coordination with the cleanroom company was immensely important. We always had direct access to Ute Schilling, who coordinated the entire project. Short distances, always approachable, a clear advantage." The deputy production manager is pleased about the smooth installation of the clean rooms and above all about the fact that the safe production of the customized printed circuit boards provides for the functionality of modern hearing aids and thus for more quality of life.

In the demanding production areas of the highly developed high-tech industries, success is only…

"If you need something for the cleanroom, you are in good hands with Schilling. We are completely…

How are cleanrooms classified?

The classification of a cleanroom depends on how clean the air inside the room is. To classify a…

Our products and services