cancer research in the cleanroom

Immuno-oncology therapies treat tumours with individual support of patients’ immune systems. In the field of immunological diagnostics, the Immun-Onkologisches Zentrum Köln is researching and developing new methods of cancer treatment. A 100-square-metre GMP cleanroom laboratory was installed in Cologne for sterile production of the vaccines.

Already since 1985 the Immun-Onkologisches Zentrum Köln (IOZK) has been employing physicians and natural scientists to research the role of the immune system in cancer. The oncological immunotherapies developed out of this aim to support the body’s immune system in destroying cancer cells.

Tobias Geef, Head of Purchasing and Technology at IOZK, attempted to explain the complex processes of the therapy in simple terms:

‘We use the biological foundations of immunology in our research and develop vaccines that activate the immune cells of the body for fighting cancer. Through our vaccine the immune system is targeted specifically at the tumour antigens of the tumour to attack it. The therapy should put the immune system in a position to become active itself and fight the disease on its own. In the ideal case the tumour is thus completely and sustainably removed by the body’s own defences without side effects.’

Development of vaccines for fighting cancer

In combination with oncolytic viruses that can specifically attack cancer cells, this creates a groundbreaking approach to fighting cancer that drastically reduces the side effects of the treatment. The IOZK has received the authorisation to develop combination agents mixed with certain viruses. The vaccines invade and alter the tumour cells. This form of therapy is still not a treatment standard, but is already being made available as an individual treatment method for private patients. In the laboratory spaces human cells are made to grow in special nutrient fluids and at body temperature. Foreign particles as interfering factors and any bioburden must be excluded in the process.
The production of the patient’s individual vaccines hence takes place in a sterile CleanSteriCell® brand cleanroom laboratory that meets the requirements for GMP cleanroom class B.

Tobias Geef explained the necessity of the new investment:

‘The IOZK has several laboratories for research, diagnostics and production. For the production of the patient’s individual vaccines, we have to meet the requirements for pharmaceutical production and the requirements of the Medicinal Products Act. We have now invested in a brand new production laboratory with cleanroom technology. The cleanroom system corresponds to GMP cleanroom class B, is energy-efficient and is state-of-the-art; that was important to us.”

The cleanroom laboratory was planned and built by SCHILLING ENGINEERING. A special challenge resulted from the limited space conditions and the low ceiling height in the existing building. The 100 square metres of the cleanroom were tailored exactly to these space conditions and the corresponding ducting was planned for the air-conditioning technology. With over 120 air changes per hour, the supply of the clean areas and workstations with ultra-pure air according to the principle of low-turbulence displacement ventilation was secured. Filtering takes place via laminar flow units equipped with ULPA 15 high-performance filters integrated in the ceiling. The system from SCHILLING ENGINEERING is operated with an especially energy-efficient air recirculation process to reduce the high energy costs associated with the operation of a cleanroom. A large portion of the air discharged from the cleanroom is thereby circulated within the cleanroom walls and introduced back into the circuit via the filter units. Because this air is already cooled and has a reduced particle count, the high costs of air conditioning are omitted. In addition the filter units take longer to become clogged and thus have a considerably longer service life.

Workstations for up to ten employees were set up in the new GMP laboratory. Three personnel and three material airlocks which are operated with different air pressure stages and air changes guarantee the purity of the laboratory system to GMP class B. A special feature of the cleanroom laboratory is the integrated GMP-compliant monitoring. Particle count, temperature, relative humidity and air pressure are continuously monitored and recorded for the required monitoring. Serving as a control system for the cleanroom and the air-conditioning technology is the user-friendly CR Control®, with which all setpoints including the air-conditioning technology are regulated and monitored and which is operated via a central touch screen or a mobile device.

The CleanSteriCell® cleanroom system has a modular design and can be flexibly extended and converted thanks to a patented silicone-free GMP sealing clip system.

The cleanroom laboratory was qualified according to GMP regulations and handed over in turnkey condition by SCHILLING ENGINEERING. Tobias Geef was very pleased with the support of the cleanroom experts:

‘The qualification of the GMP cleanroom went smoothly. There are very many regulations that have to be adhered to here, but our cleanroom supplier prepared or took over everything well for us. We just went into production and are very satisfied with the way things are running. A big plus is that Schilling Engineering could offer us a complete package for the cleanroom laboratory. In addition to the actual cleanroom and air-conditioning technologies, for example, a GMP-compliant monitoring system, the easy-to-understand control system and the entire furnishings were supplied to us. Now we have a central partner, even for future servicing.’ 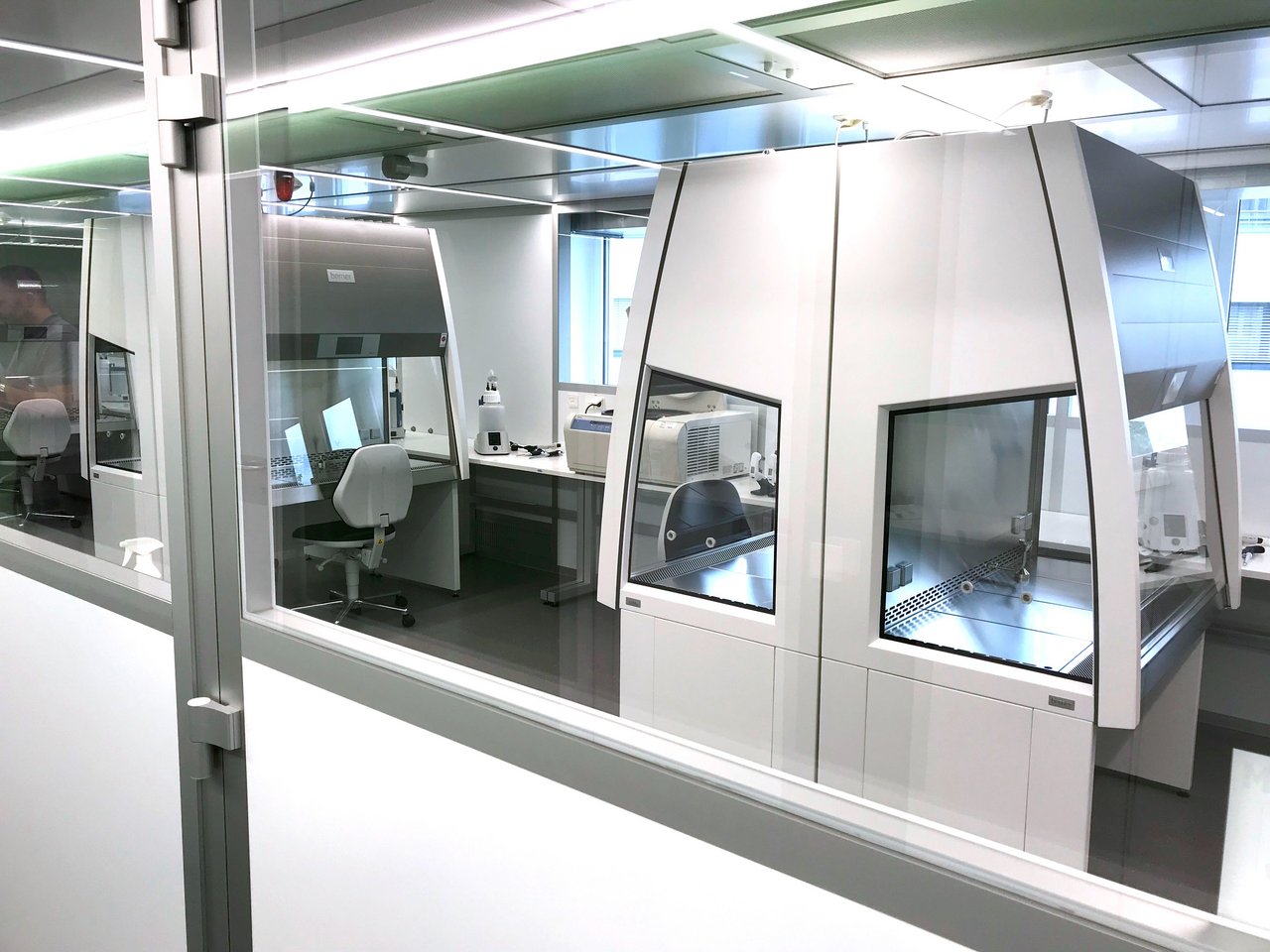 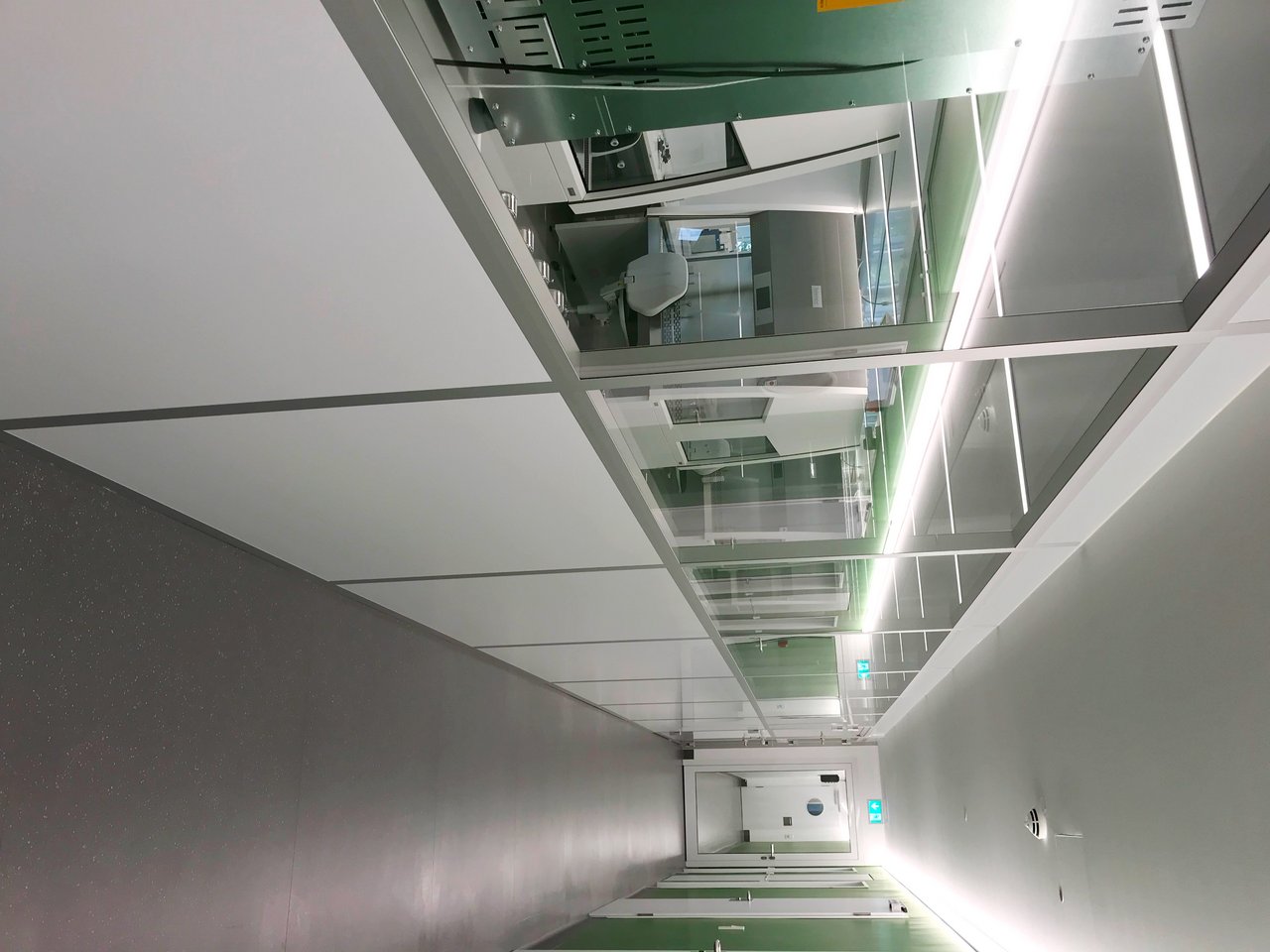