The Plansee Group, based in Reutte, Austria, specializes in the powder metallurgical processing of the high-tech metals molybdenum and tungsten. Ongoing investments in the development of new products and process improvements secure the site and the employment of the approximately 2400 employees. Now an almost 400 sqm cleanroom of ISO cleanroom class 6 has been put into operation, which meets the high safety standards of the semiconductor industry.

With more than 14,000 employees at 50 production sites worldwide, the private company Plansee Group generated sales of EUR 1.5 billion in the 2018/2019 financial year, making it one of the world market leaders in powder metallurgical processing of tungsten and molybdenum. The headquarters and the largest production site are located in Austria, where the company originated in 1921 as the Plansee metal works.

If a metal processing operation first brings to mind production with chips, dust and dirt, exactly the opposite is true in case of Plansee. The company focuses on high-melting metals such as tungsten and molybdenum, which have special properties such as high resistance and good conductivity. The metals are first processed into high-purity powder and then pressed and sintered. The semi-finished products and components are required in the electronics industry, in semiconductor manufacturing and in medical technology. Absolute cleanliness in production therefore has top priority.

For the current production of components for semiconductor production, the process even takes place within an ISO class 6 cleanroom. In the state-of-the-art cleanroom  CleanCell4.0® partss made of molybdenum and other materials are assembled, which could be impaired in their function by the smallest impurities. Contamination of the sensitive components by particles must be absolutely ruled out. That is why over half of the 400 sqm production area meets the strict cleanliness requirements of ISO cleanroom class 6.

Clean air is introduced into the clean room with the help of laminar flow units integrated in the ceiling, which are equipped with ULPA15 high-performance filter. The particle-free air flows displace airborne particles downwards and are then discharged from the clean room into the air circulation system. This air exchange process is carried out up to 60 times an hour. Recirculation and return air are routed within the clean room walls. The already cooled and filtered air is circulated, which contributes to the very efficient operation of the cleanroom. In addition, the air flow within the walls ensures optimal use of space. Plansee opted for a cleanroom system from Schilling Engineering. Mario Kuisle, project engineer at Plansee explains the advantages of the system:

“The air circulation of the CleanCell4.0 clean room system convinced us from the start. This will enable us to save high energy costs in the long run. Another important factor was the fact that the air flow inside the walls ensured optimal use of space. The clean room was adapted precisely to our conditions."

The particular conditions of the on-site location required in many respects a clean room, which was tailored to customer requirements. The project engineer remembers some of the challenges that the planning cleanroom company faced:

“The on-site ceiling of the Plansee hall is structurally unsuitable for suspension, among other things due to the expected snow loads. Subsequently, the cleanroom ceiling was constructed using a self-supporting framework made of aluminum profiles. The ceiling is accessible and has been marked with stable walking paths. A huge advantage of the construction is that the cleanroom was built without supports and columns. "

Another challenge was the required height of the cleanroom, which was designed to be four meters higher than normal cleanrooms. The height required by the installation of measuring machines could be achieved with removable wall elements. The ceiling, which is equipped with 67 clean air units, has a modular structure and can be flexibly redesigned. The modular system of the CleanCell4.0® cleanroom enables flexible planning of future utilisation, as Mario Kuisle explains:

"The modular design of the clean room system helped us significantly in our investment decision. We wanted to be able to quickly and flexibly convert the cleanroom to other production processes. We are currently producing for semiconductor production and have integrated the production machines into the clean room walls. Thanks to the modular wall and ceiling elements, we can convert to changing allocation concepts in the future. "

Dimmable LED light strips are integrated homogeneously into the aluminum strips of the ceiling which with 1000 lux achieve uniform lighting with little shade and contribute to energy savings. Doors and material locks are also illuminated with LEDs and using various colours visualise whether a door can be opened or must remain closed for pressure compensation and active flushing. The connected control and monitoring system CR-Control® offers intelligent control, using which individual filter units, production-relevant room data such as temperature and humidity and the air conditioning technology are controlled and monitored. The high-precision air-conditioning technology temperates the room with a very slight deviation of +/- 1 ° C and is also characterized by extremely energy-efficient air conditioning.

Mario Kuisle is very satisfied with the first months the clean room has been in use:

“The cleanroom runs flawlessly. The technology is very complex, but perfectly coordinated and well thought out. The energy optimisation of the clean room was very important to us. Using a heat pump, we can save high additional costs in the long term. We also have the option of programming a night-time reduction. The quiet filters and good lighting are also very positive, which facilitates the daily work in the cleanroom.” 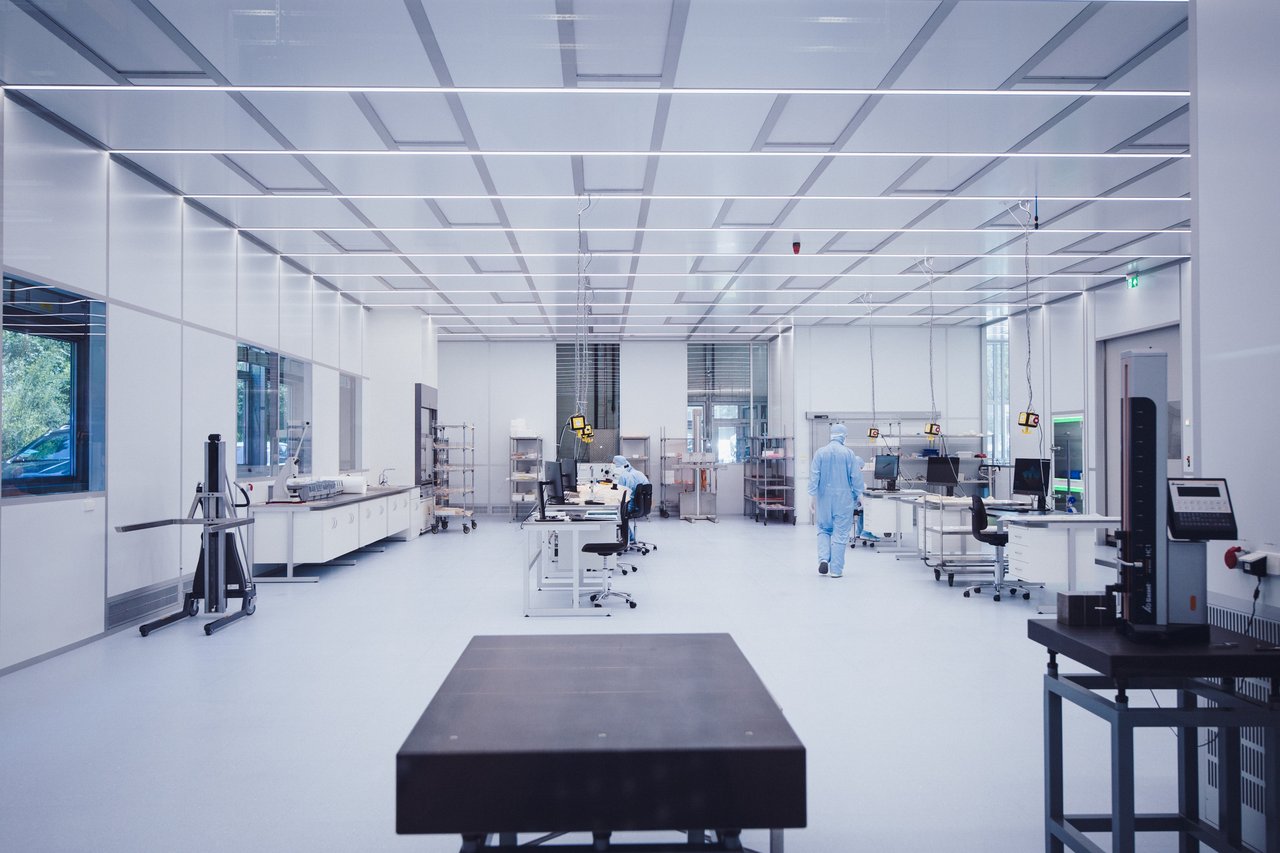 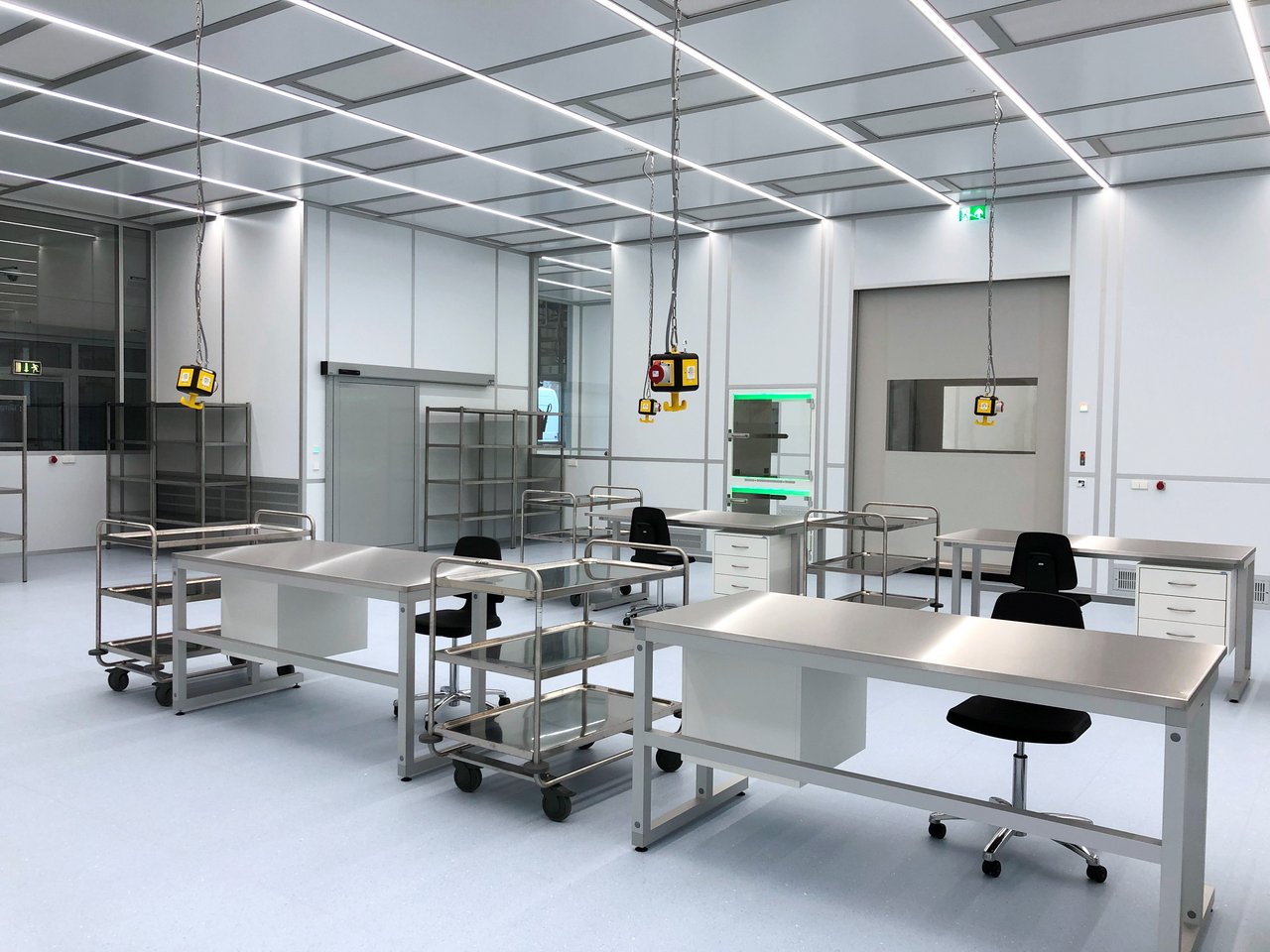